A night at the CBC with A.M. Smith 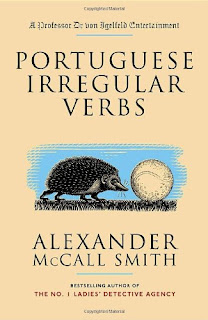 Just home from a wonderful evening at the CBC (that's the MotherCorp, the Canadian Broadcasting Company for those of you NOT North of the 49th). I was lucky enough to be invited to a North by Northwest taping of Alexander McCall Smith. If you're familiar with the No. 1 Ladies' Detective Agency, 44 Scotland Street and (my personal favourite) the Portuguese Irregular Verbs Series, you'll know his name already and may even be knee deep in at least one of his ongoing series of books.

He's just launched another series, beginning with Corduroy Mansions, which includes (as well as many human characters) a vegetarian Pimlico terrier named Freddie de la Hay. Mr. Smith has written something like 70 books, although he claims that some of them are childrens' books and therefore shouldn't count, even though they do have covers and page numbers. He claims to write between 4 and 5 books a year (I believe it - he is hard to keep up with!), and says it's not so much that he sits down to write, it's as if his characters go on living when he's off writing other things, and then he sits down one day and asks what they've been up to while he's been gone.

Amongst the interesting facts he revealed this evening ... that he's just in the last day or so begun the next in the No. 1 Ladies' Detective Series (a lot of which he says he writes when he stays here in Vancouver, where his sister lives), that he has an inordinate fondness for a musical group called Kenny Young and the Eggplants, and that he can't possibly explain why 97% of his readers are women, except that perhaps the men who read him still haven't come out to their friends and families.

I was expecting a Scottish accent of some sort, but he sounded decidedly English to me (and I should know, having cohabited with one for more than 20 years now). He was terribly funny, but in that dry, understated way the Brits are famous for. Although at one point he nearly joined the audience in a fit of gleeful giggles while reading a particularly amusing passage from Corduroy Mansions. He seemed genuinely and shyly pleased by the attention, applause and laughter from the audience. He very kindly stayed afterward to sign books for (and take pictures with) anyone so inclined. My face hurts from smiling - and that's always a good thing.

P.S. As well as a future podcast, the interview will be aired on CBC AM the next two Saturdays from 8 am to 9 am (PST) on North by Northwest. Go here for more details, and if you hear someone laughing while you listen ... well, yes, that was me.

And another P.S. - Mr. Smith mentioned that he's been serializing several of his books online lately, and indeed if you go here you can hear Andrew Sachs (AKA Manuel of Fawlty Towers fame) reading the next book in the Corduroy Mansions series: The Dog Who Came in From the Cold.
Posted by Penelope Harris at 11:15 pm

Sounds like a good night all around. It's always gratifying when the authors one reads are both personable and humble. It makes them all the more enjoyable, in my opinion.

Did you fly solo or go with friends?

Thanks for sharing your evening with
AM Smith. I enjoy reading his books and am not familiar with the Portuguese Irregular Verbs series.
Sounds like a trip to the library.

Caught the interview on the radio this morning. I agree, he's a hoot.

Newer Post Older Post Home
Subscribe to: Post Comments (Atom)
"She has marked the kingdom of this world, how full it is of wealth, and beauty, and war -
a radiant crust built around central fires, spinning towards the receding heavens."
- E.M. Forster,
Room with a View

Penelope Harris
Making stuff with pixels and paper on the West Coast of Canada ...